The Federal Deposit Insurance Corporation was a governmental agency set up after the great depression in 1929. So very many people lost everything when the banks closed their doors, that President Roosevelt felt he had to prevent this from happening again. 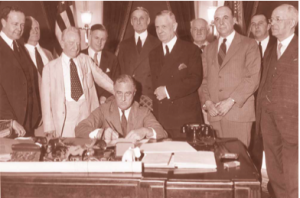 On June 16, 1933, President Franklin Roosevelt signed the Banking Act of 1933, a part of which established the FDIC. At Roosevelt’s immediate right and left were Sen. Carter Glass of Virginia and Rep. Henry Steagall of Alabama, the two most prominent figures in the bill’s development.

President Roosevelt signs this act on June 16, 1933, to raise the confidence of the U.S. public in the banking system by alleviating the disruptions caused by bank failures and bank runs.

From 1929 to 1933, bank failures resulted in losses to depositors of about $1.3 billion. Before the FDIC was in operation, large-scale cash demands of fearful depositors often struck the fatal blow to banks that might otherwise have survived.

Since the FDIC went into operation, bank runs no longer constitute a threat to the banking industry.

In 2018, FDIC Chairman Jelena McWilliams announced Trust through Transparency, a new initiative to foster a deeper culture of openness in the FDIC. Building on the FDIC’s foundation of public trust and accountability, this initiative is strengthening trust between the FDIC, other regulators, the public, and banks.

All information is Curtesy of the website FDIC.com and the Federal Reserve. For more information go to https://www.fdic.gov/about/history/