How our Military folds the American Flag using the same steps and what it means is rooted in history. Thanks to many military sites and the National Flag Foundation, we see how the Flag of the United States of America is treated with respect and difference today.

Why is the flag folded into a triangle?

The blue section of the flag represents honor and during ceremonies and burials, the stars representing the states from which our veterans served. It is dressed from left to right when held but is inverted when draped over a casket of a veteran who has served our country honorable while in uniform.

During a ceremony of retreat, the flag is lowered, folded in a triangle, and kept under watch throughout the night as a tribute to our nation’s honored dead. The next morning it is brought out and, at a ceremony of reveille, flown high as a symbol of belief in the resurrection of the body.

The following morning it is brought out and, at a ceremony of reveille, flown high as a symbol of belief in the resurrection of the body. *** Courtesy of Military.com 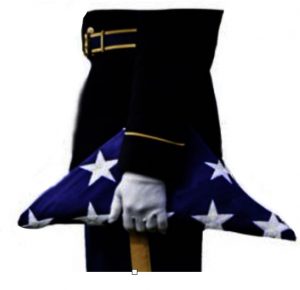 The flag is then folded into a triangle and tucked in, giving it the appearance of a three corned hat, which reminds us of the soldiers who served under General George Washington and the sailors and Marines who served under Captain John Paul Jones to aid in preserving our rights, privileges, and freedoms that we enjoy today.

How the ceremony is handled

First, the Honor Guard lifts the flag off the casket.

In silence, the tautly held flag is twice folded in half lengthwise; then (from the end opposite the blue field), a Guard member diagonally folds the end to form a triangle.

From that point on, the Guard continues the crisp folding of the colors in triangular shapes until the blue field of the flag is reached.

The two lengthwise folds and the eleven triangular folds comprise the thirteen folds commonly associated with the presentation of the flag at a military funeral. *** Steps – courtesy of OurMilitary.com 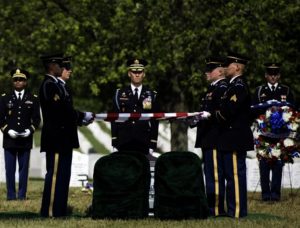 What do the thirteen folds of the flag represent?

How should we treat the Flag of the United States of America? 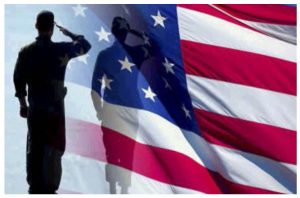 The canton (Blue section with stars) is always in the upper left corner.

How to properly dispose of an American Flag