The history of the Flag of the United States of America is painted in broad strokes.

The story of the origin of our National flag runs parallel with the story of the origin of our country. The grand makeup of the flag is very symbolic. The Stars and Stripes rise from several origins: the star is symbolic of the heavens and the divine goal to which man has aspired. The Stripes are symbolic of the rays of light that the sun offers. Their usage in flags has stemmed as far back as ancient Egypt, Babylon, and to the 12-starred flag of the Spanish Conquistadors. Widely used in Europe, Asia, and other locations in the Americas.

Although many different flags adorned the tops of colonial homes and buildings, all represented the struggles and hardships that they endured. These included animals, trees, snakes, anchors, and many used mottos such as Hope, Liberty, Appeal to Heaven and the most widely known one, “Don’t tread on me.”

The first flag that resembled our current flag was the Grand Union Flag, 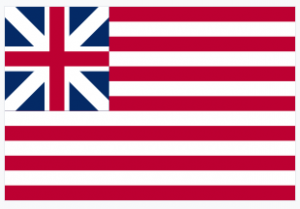 also known as the “Congress Colors.” It was also called  the “Continental Colors”, the “Congress Flag”, the “Cambridge Flag”, and the “First Navy Ensign.” It was the first official flag of the country, flying high of the ships of the Colonial Fleet in the Delaware River in December 1775. It also was the standard used by the Continental Army and by the Marines and American Bluejackets, which comprised an expeditionary force in the West Indies.

The Grand Union consisted of thirteen stripes alternating red and white, with a rectangle of blue in the upper left corner. In the blue section, two crosses were applied-the st. George and the St. Andrew, which signified the union with the mother country of England.

Historians dispute the claim that George Washington and Betsy Ross designed and made the first official flag. However, a notarized affidavit passed down by Rachel Fletcher, daughter of Elizabeth Claypoole (Betsy Ross) to her daughter, Mary Fletcher Wigert, explains how the flag had come about. Betsy Ross knew General Washington and his family for years as they attended the same church. He also had been to her home for social visits as well as on business.

A committee (one of whom was Colonel Ross, her deceased husband’s uncle) and General Washington came to her home around June, before the Declaration of Independence. They asked her if she would be able to make a flag if they gave her some sketches. Washington actually put pencil to paper, and Betsy put the flag together and presented it to one of the committee members. The committee on the same day carried the flag into the Congress sitting in the State House and made a report presenting the flag. Congress unanimously approved and accepted the flag. On June 14, 1777, the Continental Congress adopted the national flag. The flag was officially resolved to have thirteen stripes, alternate red and white: the union of the stripes meets on a field of blue with thirteen white stars, representing a new constellation.

stripes, it was Washington and Betsy who helped change the design by eliminating the two crosses, which left a field of blue. He wanted stars but it is felt that Betsy decided to put them into a circle, to represent the 13 colonies equally.

After the Declaration of Independence, colonial vessels put to sea to impede British communications and trade. Many flew flags of the independent colony from which they sailed. It was discovered that an authorized national flag needed to be flown; Britain considered armed vessels that did not have a country flag, pirates and hanged the crew members when captured. The Marine Committee of the Second Continental Congress presented a resolution to correct this over-site.

General Washington described the flag in this way when he saw it flown by the Continental Army, “We take the stars from heaven, the red from our mother country, separating it by white stripes, thus showing we have separated from her, and the white stripes shall go down to posterity representing Liberty.”

In 1794, when two more states were added (Kentucky and Vermont), two more stars and stripes were added. They realized that the addition of a stripe, when each new state was added, would make the flag awkward. In April 1818, a law was passed that only a new star would be added for each new state and the stripes would remain at 13. The addition of the star, to the flag, would take place on July 4th of the year the state was admitted to the Union.

In 1916, President Woodrow Wilson proclaimed that Flag Day would be celebrated on June 14th of each year. Although it is not a federal holiday, Pennsylvania declared it as a state holiday. In a speech given on June 14, 1917, just before the entrance into WWI, President Wilson said, “My Fellow Citizens: We meet to celebrate Flag Day because this flag which we honour and under which we serve is the emblem of our unity, our power, our thought and purpose as a nation. It has no other character than that which we give it from generation to generation. The choices are ours. It floats in majestic silence above the hosts that execute those choices, whether in peace or in war. And yet, though silent, it speaks to us—speaks to us of the past, of the men and women who went before us and of the records they wrote upon it.”

“We celebrate the day of its birth; and from its birth until now it has witnessed a great history, has floated on high the symbol of great, events, of a great plan of life worked out by a great people. We are about to carry it into battle, to lift it where it will draw the fire of our enemies. We are about to bid thousands, hundreds of thousands, it may be millions, of our men, the young, the strong, the capable men of the nation, to go forth and die beneath it on fields of blood far away —for what? For some unaccustomed thing? For something for which it has never sought the fire before? American armies were never before sent across the seas. Why are they sent now? For some new purpose, for which this great flag has never been carried before, or for some old, familiar, heroic purpose for which it has seen men, its own men, die on every battlefield upon which Americans have borne arms since the Revolution?”

“These are questions which must be answered. We are Americans. We in our turn serve America and can serve her with no private purpose. We must use her flag as she has always used it. We are accountable at the bar of history and must plead in utter frankness what purpose it is we seek to serve.”

This flag has carried us through two World Wars and countless other wars and skirmishes. With 50 stars and 13 stripes, it stands boldly against all who would attempt to destroy freedom within and without the United States. Hold it high and with honor – no other symbol represents freedom around the world like the Flag of the United States of America.

“I pledge allegiance to the flag of the United States of America, and to the republic for which it stands, one nation under God, indivisible, with liberty and justice for all.”