History of Money in the US 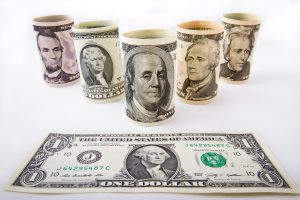 Money is defined by the Merriam-Webster Dictionary is something generally accepted as a medium of exchange, a measure of value, or a means of payment. Although it was originally used for a private exchange, an increasingly interconnected society has made money a very complex item.

They traded food items, shells (which they used in costumes and designer jewelry of the day), cattle, and eventually metals. Metals were used for tools, weapons, and eventually were shaped into coins.

They traded food items, shells (which they used in costumes and designer jewelry of the day), cattle, and eventually metals. Metals were used for tools, weapons, and eventually were shaped into coins. The rare the metal, the more value to the coin.

But people travel. Traders (note the name…) started to go from town to town or village to village with items of what they perceived of value. But unless they found items of equally perceived value, they could not accept services in lieu of payment.

Many towns and countries came up with coinage or currency that was of a set accepted value and was used within the local community. Remember, money is any item that is accepted in a transaction that involves the exchange of goods or services AND must be accepted in that society as having a standardized value.

If a trader received money from one community and then wanted to use it in another community (or even at home), it would have to be in a form that was of an accepted value.  Just as it is now – a US dollar does not have the same value in Europe as it does here. The perceived value fluctuates. But we will talk about that in another area.

Money is medium that can be exchanged for goods and services and is used as a measure of their values on the market, including among its forms a commodity such as gold, an officially issued coin or note, or a deposit in a checking account or other readily liquefiable accounts. **Courtesy of the American Heritage Dictionary of the English Language

Social Perception plays a huge part in the value of money. As society developed, money became associated with crops, minerals, or backed by governments.

So the money that will be accepted by society is an item that is perceived as being stable. If it is backed by a known and acceptable commodity, that is one-way money is considered stable. Backed by a strong government that guarantees the value is another form of stable money and is called Fiat Money (money that has been given a promise by decree from the government). If the government becomes perceptibly weak, or the goods and output of product from that government decreases, then the value of the fiat money sinks.

This sinking is called inflation.

There are many different monies by type. Hard money or coins and soft money or paper. The hard money is backed by the actual value of the metal on which they are formed. However, soft money was usually backed by the promise of exchange. 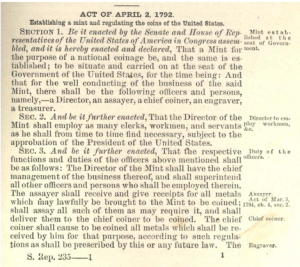 In the US, Silver was a more available metal than gold and so was adopted as the standard for money at that time. The Act also set up the US Mint, to handle the design, strike, and the distribution of coin in the US. It set the initial price values and discussed a bimetal system using both gold and silver as the materials.

The Silver standard, monetary standard under which the basic unit of currency is defined as a stated quantity of silver.

The US Mint has changed over the years and we will discuss this in a different article.

When President Ulysses S. Grant signed into law the Coinage Act of 1873 (also known as the Mint Act of 1873 or the Fourth Coinage Act), the ramifications of his action would not be noticed for several years. The passage of this act, though, ended up being so notorious that many would later call it the “Crime of 1873.” To read more about this Bill, go to https://www.usmint.gov/news/inside-the-mint/mint-history-crime-of-1873

While the main focus of the bill was to revise several laws pertaining to the Mint’s structure and procedures, the Coinage Act of 1873 also recommended moving the United States off of bimetallism in favor of the gold standard. In 1867, foreign counterparts in Paris had discussed turning away from silver toward a gold standard based on the weight of 25 francs. The move would help standardize currency across international borders, hence the relevancy to the bill.

Since 1853, silver bullion could be taken to the Mint and be coined into the standard silver dollar. Just like its gold counterpart, silver was considered legal tender. In other words, the value of the coin that could be minted from silver bullion was unlimited. Since the country was on bimetallism, the same principle held true for gold. The only noticeable difference (prior to 1873) was that silver coins had become quite rare—Greenbacks and National Bank notes were much more common and obtainable, especially to the working class.

Read more on why this became such a financial debacle for miners, farmers, and those with debt.  https://www.usmint.gov/news/inside-the-mint/mint-history-crime-of-1873

The Gold standard is a monetary system in which the standard unit of currency is a fixed quantity of gold. In the United States, the Gold Standard Act was officially enacted in 1900. This standard was used until the Great Depression. When confidence in paper money (devaluation) declined, people started to horde gold.

Franklin D. Roosevelt stepped in to stave off some of the economic catastrophes that had hit the country.

After the Depression of 1929, people did not trust banks to hold their assets. They hoarded gold, silver, and other precious metals at home. By 1933, President Roosevelt needed more funds to cover all his initiatives, so he took measures to bring more gold into the Treasury Department. He signed the Gold Reserve Act in 1934, which made it illegal for the public to possess most forms of gold. People were required to exchange their gold coins, gold bullion, and gold certificates for paper money at a set price of $20.67 per ounce.

European nations had dropped the gold standard during WWI because they did not have enough gold to cover it. Once done, they could print more money and finance their war efforts.

Currently, we are using Fiat Currency in the US called a Federal Reserve Note, backed by our strong government.

What is the Future of Currency? 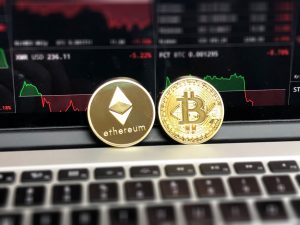 The European Union’s gross domestic product places its economic influence around the world alongside the US and the strongest. As we looked at this article earlier, as Europe goes, often so goes the US policies regarding currency, usually for the same reasons. We went off the gold standard for the same reason – to be able to fund more projects and wars.

But will we lead or follow on the newest currency form – Cryptocurrency? This is the big question. Currently, The Europe Central Bank recognized the Cryptocurrency but does not have plans to issue its own version nationally at this time, (much to the disgruntlement of some countries like Estonia).

Does our government have plans to issue any cryptocurrency?

Many Departments within the US government are dealing with cryptocurrencies. The Federal Marshals are seizing and selling cryptocurrency at auction https://www.usmarshals.gov/assets/2018/bitcoinauction/, the IRS is issuing tax instructions regarding crypto-assets, https://www.irs.gov/pub/irs-drop/n-14-21.pdf,  Congress is starting to introduce Bills to clarify who’s in charge of the crypto monies https://www.congress.gov/bill/116th-congress/house-bill/6154, and the Federal Reserve and Treasury are exploring the pros and cons to issuing digital currency.  https://www.federalreserve.gov/newsevents/pressreleases/other20200813a.htm .

The research continues at a very fast pace and we will have to keep our eyes open to see if or when our government decides on a digital instrument of Currency.