Ben Franklin and his service to our country is a model we should all follow!

Ben Franklin and his service to our country began at a very young age. Benjamin Franklin managed to become a master as well as a jack of all trades. He was born in 1706 in Boston Massachusetts and was one of 17 children.  His father was a candlestick and soap maker. Benjamin attended school in Boston for two years; he was excellent in reading, fair in writing, and poor in arithmetic. Due to financial issues, his father finally decided that he could not afford to further educate his son, so at the age of 10, Benjamin came home to work in the candle shop. 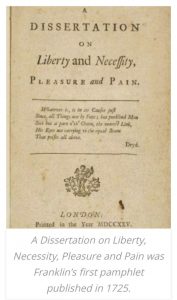 Although he was no longer going to a formal school, Benjamin educated himself in geometry, algebra, navigation, grammar, logic, and basic pros. His study of the physical sciences was demonstrated in his abilities to perform experiments later in life. He partially mastered foreign languages: French, German, Italian, Spanish, and Latin.

An Independent Spirit at age 12

After working at the candle shop for two years, which he did not enjoy, his father told him to join his brother who was a printer. He apprenticed with his brother and became a very skilled printer, and also a writer.  Franklin published newspaper articles under the pen name of Mrs. Silence Dogood. Benjamin would write the articles, then slip them under the door of the shop. His brother didn’t know that it was he that was doing this until later. When he discovered that Benjamin had written them, he refused to print them further.

Benjamin wanted to strike out on his own, and so between 1723 to 1730, he worked for various printers around 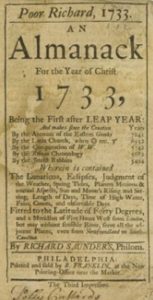 Philadelphia and later in London, England. He had been sent there to buy printing presses and remained for a time. So from a young age, he became a publisher. Franklin published the Pennsylvania Gazette, from his own printing shop, which was one of the most successful newspapers in the colonies. Benjamin also achieved greater success when he published Poor Richard’s Almanac while using the pen name of Richard Saunders. The Almanac was published every year from 1733 to 1758. The Almanac had witticisms and amusing sayings throughout the issues and are known even today.

Public Service was thrust upon him. 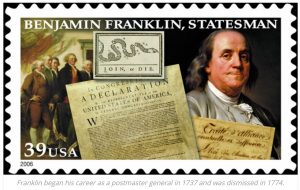 He had never really wanted to become a public servant, but he became one when he was appointed as the Clerk of the Pennsylvania Assembly. One of the things that he noticed as soon as he became part of the assembly was at the colonial postal service was horrible. He wanted to improve this, so he agreed to become the Philadelphia Postmaster in 1737. The British government was so impressed with his work that they appointed him Postmaster General for all the colonies in 1753. He remained in that position until 1774 when he was dismissed because of his colonial sympathies.

He was very public-minded and constantly wanted to make Philadelphia a better place to live and work. He established the world’s first subscription library, he reformed the city police department, and since the city streets were not paved, he started a program to pave and clean the streets and keep them well lighted. At that time, the sick and insane were not cared for, so he established the Pennsylvania Hospital to help them.

The scientists in the American colonies did not have any professional organization, so Franklin established the

American Philosophical Society headquartered in Philadelphia. The school system did not have higher learning in Philadelphia, so he helped establish an academy that later became the University of Pennsylvania. As a result of all the projects that he was involved with Philadelphia became the most advanced city in the 13 colonies.

A true scientist of his day with many inventions to his credit.

Franklin was definitely a scientist at heart. We all have heard of his homemade kite flying and the establishment of electricity. He is given credit for coining phrases and words such as armature, condenser, and battery. He’s been involved with a lot of personal risks while he was doing these experiments and he knocked himself unconscious at least once. He had been trying to kill a turkey with an electric shock but something went wrong and Franklin, not the bird was stunned. Later he said, “I meant to kill a turkey but instead I nearly killed a goose.”. At age 11, he developed swimming fins. Later, he invented a glass armonica, the Franklin Stove, lightning rods, street lamps, Bifocals, an odometer, and a flexible urinary catheter. Franklin’s scientific work received many high honors and he was appointed to the Royal Society of London for membership, which was a rare honor for anyone living in the colonies

He presented a plan of a union at a conference of seven other colonies in Albany New York, for which the meeting was named. He tried to bring all 13 colonies together in one general government. Some of the ideas that he had penned, were later used when the constitution of the United States was actually ratified. However, even though the Albany conference approved his plan it never ratified it. Franklin said: “Everyone cries a union is absolutely necessary, but when it comes to the manner and form of the union, their weak noodles are perfectly distracted.” 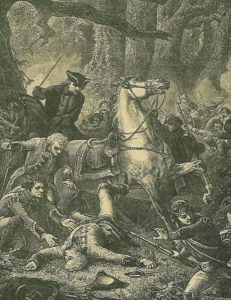 During that war, the king had sent General Braddock and two British regiments over with orders to capture the French stronghold at Fort Duquesne, near the Monongahela River. The British were having trouble finding horses and wagons for the expedition and Franklin helped provide the necessary equipment. He tried to give Braddock a timely warning; Franklin told him he must at all costs avoid having a surprise ambush by the French to catch him off-guard. This the General ignored, and the French attacked surprising them on the banks of the river. The result was that Braddock was killed and the British army was almost totally destroyed.

An Ambassador and Spokesman 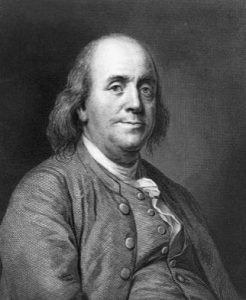 of view in the colonies.  During that time he became an advocate against the stamp act. The Stamp Act was Parliament’s first serious attempt to assert governmental authority over the colonies. Franklin realized the dangers and joined in a struggle to repeal it.

On February 13, 1766, Benjamin Franklin appeared before the House of Commons to answer 174 questions dealing with taxation without representation. They grilled him for nearly 2 hours and he answered both briefly and clearly. His knowledge of taxation problems impressed everyone and his reputation grew throughout Europe. The stamp act was repealed a short time later and he receives much of the credit for that. For more information regarding the Stamp Act, you can read the full account at https://www.ushistory.org/declaration/related/stampact.html

While the relationship between Great Britain and the colonies declined steadily, Franklin, while still residing in England, attempted to keep everything calm. He even offered his entire fortune to pay for the tea that was destroyed during the Boston tea party if the British government would agree to repeal its unfair tax on tea. The British ignored this and Franklin then realized that he was no longer going to be effectual while staying in Britain. In March of 1775, he returned home, and shortly thereafter, was elected postmaster general for the colonies by the Continental Congress. They needed him to design the postal system very quickly and he gave it his all. It did not take long until he had mail service from Portland Maine down to Savannah Georgia. He gave all of his salary from that position to the relief of wounded soldiers.

No Taxation without Representation!

Although Franklin had desired the colonies to remain a part of Britain, he did not want it to do so if they could not 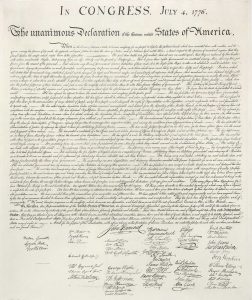 get proper representation and fairness in the parliament. He was instrumental in the draft of the Declaration of Independence and was one of its signers. During the signing ceremony, John Hancock warned his fellow delegates, “We must be unanimous; there must be no pulling apart different ways; we must all hang together.”  “Yes,“ Franklin added “we must indeed all hang together, or assuredly we will hang separately.”

It became apparent very quickly to the leadership as the fighting started, that the colonies would need help and Benjamin Franklin was appointed as minister to France. An alliance with France might make the difference between gaining them their independence or losing horrifically to Britain. He left for Paris to speak with the French government. France loved Franklin. They welcomed him with open arms and treated him with great respect. However, the French government was very hesitant to make a treaty with the American colonies because it would mean war with Great Britain. With tact and great patients, Franklin was able to win the French government over.

His main chance came when general John Burgoyne and his army surrendered at Saratoga. The French were impressed because the colonials actually had one of victory. A pact with signed in 1778 and Franklin managed to arrange transportation of French officers soldiers and guns. He kept loans and gifts of money flowing back to the United States throughout the war until we finally won our independence.

The Treaty of Paris

He then helped draft the Treaty of Paris which officially ended the revolutionary war. This was no mean feat as France, Great Britain, and Spain all had an interest in the Colonies. In 1785 he returned to Philadelphia and acted as the president of the Executive Council of Pennsylvania. This was more or less like a governorship. 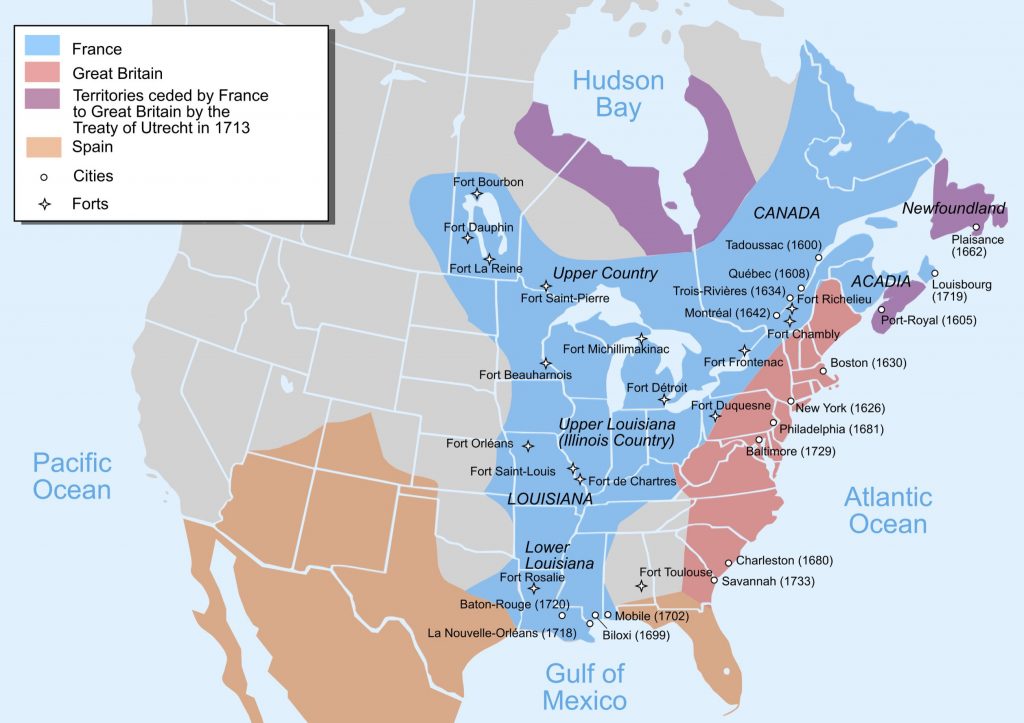 In 1787 Pennsylvania sent the then 81-year-old Franklin, to be one of the delegates at the Constitutional Convention which was meeting at Independence Hall to draft the Constitution. Although his age and some illness kept him from being as active as he would’ve liked, his wisdom and wit kept the convention together and helped settle bitter disputes between the larger and smaller states. He helped establish The Great Compromise to settle issues with both groups by setting up a two-house Congress. In his last formal speech, he appealed to the delegates for unanimous support of the Constitution. His attendance at the Convention was his last major public service.

Also in 1787, he was elected president of the first anti-slavery society in America (The Society for the Relief of Free Negroes Unlawfully Held in Bondage) and his last public act was to sign an appeal to Congress calling for the speedy abolition of slavery. He died on April 20, 1790, at the age of 84. Even in his death, he remained a positive benefactor to Philadelphia; he donated money from his estate to established public works in both Boston and Philadelphia. Part of the money was used to establish the Franklin Institute in Philadelphia, which is a science museum, and the Franklin Technical Institute which is a trade school in Boston.

His life was a true representation of the love of the country and its people. It is hoped that we can all learn from this and remember that no matter what our age, we can always contribute to society and our government if we choose to do so.